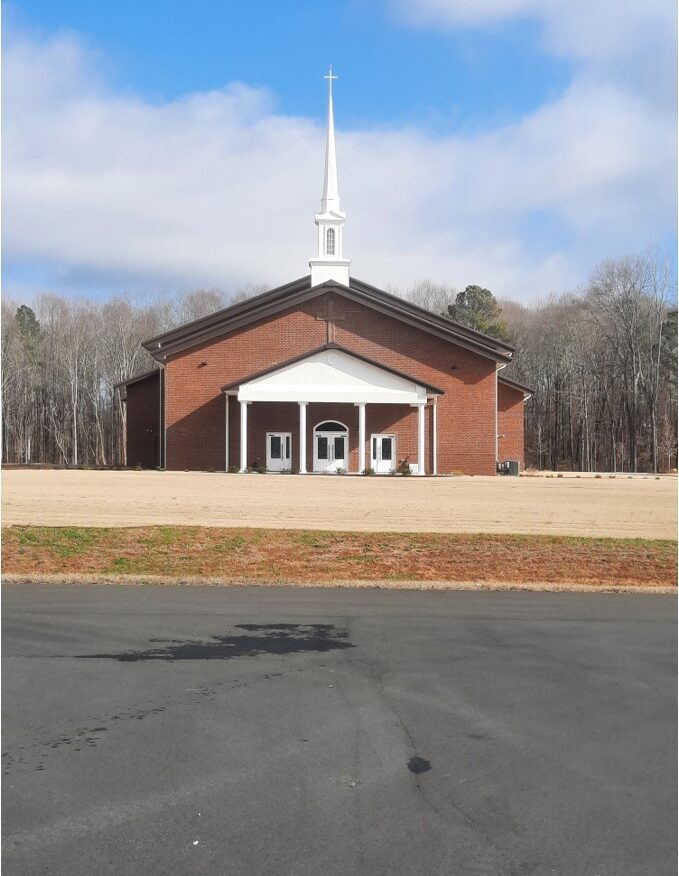 Macedonia Baptist Church presented a great opportunity for us at MRP. They were in a formidable church Building that had been in place for decades , very close to GA HWY 20. As the Hwy needed to get wider and wider, it eventually needed to take property that would mean the church had to come down. The eminent domain deal only supplied enough to build 75% of the same building on a new property down the street. The church was committed to adding in some funds but needed to get as much for their money as possible, and hopefully keep the same feel as the traditional church building.

To accommodate the spans we chose a Metal Building Structure, but disguised the structure with forms and materials that gave the comforting traditional feel back to the congregation. The church took the opportunity to make a new start in many ways, with a gracious fellowship hall for meetings and Wednesday Night Dinners. The new design also offers more and larger classrooms for growth. We built in growth potential where the pulpit And choir loft could be pushed into the two story classroom building just behind the sanctuary, when it came time to add a classroom wing. This would give the church a chance to grow before adding the wing, and then make room for the sanctuary growth into the original classroom space.

We also planned for an unfinished upper level with joists in place for the future floor, no plywood, nothing but exposed studs. Even the stairwells would serve as lower level storage rooms until the steps were put in later. Plans were made for space to expand in three directions on the outside of the church building. Much of the original construction, and the expansion plan,s centered around saving and relocating the tall stained glass windows from the old location and then again in the future expansion.

There were some technology challenges to be met as well. We built in a cantilevered sound control booth to save space. We also used indirect light to give the brightness needed for reading hymnals, but allowing the less efficient traditional pendant fixtures to hang down as features, giving the impression that they were providing more light than they are able to give.

This was a dramatic case of “More Bang For Your Buck” and building in growth for the future, all in one. Blending old-world charm with new world technology was a fun challenge that turned out for the best all the way around.